This page provides an overview of the installation process for the RogueTech mod.

Please note: This is not a support forum; please talk to us over on Discord for support; Discord Invite - https://discord.gg/93kxWQZ

One more time: the officially supported game version is 1.9.1

!! WARNING!! : Running RogueTech natively on Linux is not supported at the moment.

It can be done, but you have to do some legwork yourself. There is currently no definitive list of supported distributions or setups. If you manage to get it to run, consider adding your setup to the list below.

DO NOT pester the community support if it doesn't install or run on your particular distribution or general setup.

Throughout the guide some shell expertise and general Linux knowledge is expected from the user.

Depending on distribution, that may require editing /etc/security/limits.conf, /etc/systemd/system.conf and /etc/systemd/user.conf and rebooting.

Launch BattleTech in Steam. You should see the RogueTech title screen come up. If so, enjoy RogueTech! The Launch RogueTech button in the RT launcher probably won't work. If it doesn't work, you may need to troubleshoot this known issue with recent versions of BT.

!! WARNING!! : Running RogueTech natively on macOS is not supported at the moment.

It can be done, but you have to do some legwork yourself. There is currently no definitive list of supported distributions or setups. If you manage to get it to run, consider adding your setup to the list below.

DO NOT pester the community support if it doesn't install or run on your particular distribution or general setup.

Throughout the guide some shell expertise and general macOS knowledge is expected from the user.

RogueTech comes with a launcher which installs the game and runs (on Windows only) the game. The Launcher window can be seen on the right. 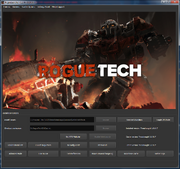 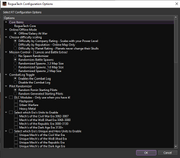 If you've purchased DLC and want to enable RT's respective DLC modules, or decided to add additional features, there are no compatibility issues. It is always* OK to add more features to an existing RT career (*barring unreported issues).

These options can be found during setup. If you wish to reconfigure these options, the Reconfigure RT button on the launcher can be enabled by clicking Update/Install RT.

If this is your first time playing RT, see Introduction to Roguetech for an easier time to adjust to RT.

Select between Galaxy At War, or the Online Experience

Select whether you want to manually direct your dropship to deploy your units, or use game default of automatic deployment.

Select whether you want to manually direct any allied convoys on escort missions, or use the game default AI.

Increase the Map Size to change the field.

Select to enable or disable support lances for PLAYER side.

Changes whether the combat log is generated (for debug purposes). May improve performance on some machines if Floaties are disabled.

Select only DLC modules that you have installed. These modules are required for each DLC installed! Enables additional RT features.

Each ticked box will add units from the corresponding era to the game.

Each ticked box will add the corresponding hero units to the game.

Adds more custom pilots for you to hire.

Each ticked box adds a different set of emblems to the game.

Whether you want to commit warcrimes.

Shiny glowing fire, instead of tiny smoke plumes. Disable if all you see is pink, this is a known shader issue, ESPECIALLY on linux/mac!

Fog of War on a by Unit Basis[edit | edit source]

Reveal Fog of War on a by unit basis. This has no affect on unit ability to see, sensor, or shoot, and is only for what you see from your top view.

Greens the screen when your mech has night vision.

Defines what is the increase in animation speed of the mechs. 100% increased speed will make units animate 2 times faster.

Combining with the in-game option Speed Up Combat has led to negative results. Use with caution.

Auto sorts mechs in Mech Bay. Will do the sort on first entering the mech bay screen.

Select which mech portraits to use.

Note this does not repair internal components. Auto Repair does not know internal component damage and it has proven extremely complicated to try and make it do so. These repairs must be carried out by going into Refit, click Repair All, and Confirm.

Formerly known as the Tarkov Fix. Enables MultiThread Rendering. Leave this on for big performance boosts unless you're crashing a lot.

These performance fixes greatly enhance the performance of RT, bringing performance often in excess of vanilla levels. Since these fixes are highly customized, there may be errors associated with this when turning them on. If turning them off resolves an issue you're experiencing, be sure to open a ticket on discord and file a report, so that it can be addressed.