Edit
Welcome to the Official Roguetech Wiki
The hub of the infamous [BATTLETECH] mod, RogueTech! 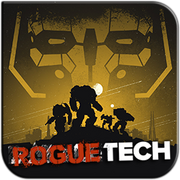