This is a mod for the HBS BattleTech game that divides each round of play into 30 initiatives phases. Each round, every model's place in the initiative order is determined by the pilot's skills, chassis weight, injuries taken, morale state and many other factors. A small random factor is applied to these results. The end result is to make the turn sequence less deterministic and something you have to cope with instead of being able to fully plan out your strategy.

The skill level of each Pilot becomes very important in this mod. Novice MechWarriors with low tactics or piloting skill will typically act later in the round, even in light or medium mechs. Veteran MechWarriors can push the limits of their equipment and have heavy or assault mechs going at the same time as unskilled lights. High-tech equipment such Clan cockpits provide initiative bonuses that can boost the weak or help the elite become even more fearsome.

Almost all values are available through tool-tips in the mech bay, lance drop and combat UI screens. Hover over the initiative badges (the hexagons) and many details of the system will be defined.

This mod emphasizes a MechWarrior's Tactics, Guts, and Piloting skills.

Certain pilot tags provide bonuses or penalties to reflect the different quirks each pilot has.

Certain effects impact your phase number during the course of battle. These effects include:

The sections below detail some of the calculations used by the mod. Please note that these can vary as the code changes, and may be out of date. You are better off checking the code for these details instead of relying upon this documentation.

A MechWarriors's Tactics skill adds a flat modifier to the base initiative defined by the unit tonnage. This value is graduated, as defined in the table below.

The following diagram illustrates the combination of tonnage and tactics to show the various ranges in which units will operate. In the table below, the sum is given by the ⌄ symbol, next to the tactics value that would set the boundary. The ⌃4,5 block defines the minimum value for a pilot with Piloting skill 4 or 5. As we'll see shortly, this value can be used to evaluate how average skill units will interact across tactics and tonnage limits. 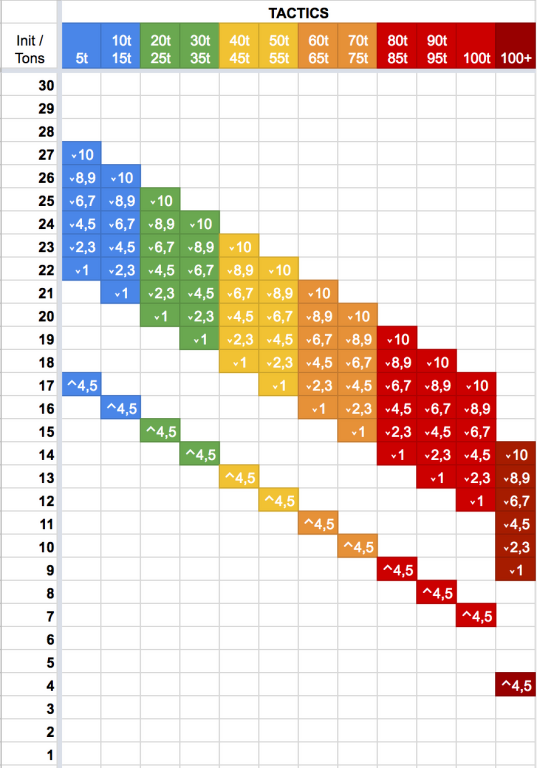 In addition, tactics reduces the impact of the reserve carry over penalty. Each time a unit reserves, the number of phases dropped is added to a penalty applied on the following round. Each time the phase drop is applied, it is reduced by the tactics skill modifier defined above. A high enough tactics modifier can reduce this penalty to 0.

Example: A unit reserves 3 times during a round, dropping 5 phases, 3 phases, and 7 phases. The reserve penalty applied on the following round would be:

The Piloting skill impacts initiative in two ways. The first is by reducing a random element that is added each turn. Each turn, a unit's maximum initiative (tonnage initiative + tactics modifier + equipment modifiers) is reduced by a random amount, defined in the table below:

The diagram below illustrates this as ranges based around the maximum initiative, represented as 0. 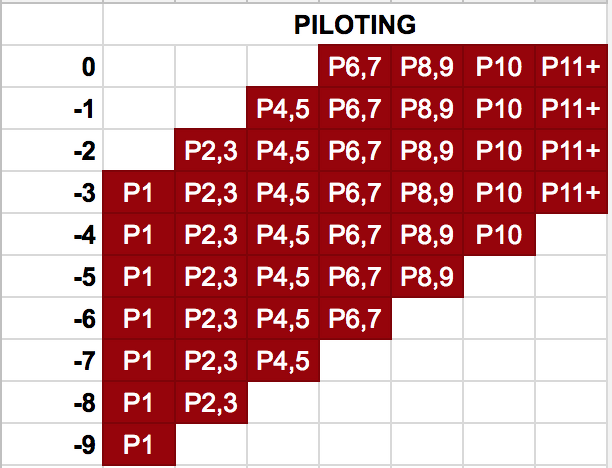 In addition, some effects that reduce your initiative will be offset by a high piloting skill. Suffering a knockdown, being prone or shutdown results in initiative penalties. These penalties are reduced as per the table below:

Guts skill comes into play when the pilot suffers an injury, or the unit is successfully attacked in melee.

When a pilot is injured, they suffer a random penalty within a range bounded by their Guts skill. The ranges are defined below.

When successfully damaged by a melee attack, the unit suffers an initiative penalty determined by the relative tonnage of the attacker and defender (see above). This penalty is reduced by the target's Guts skill rating, as defined by the table below.

For a given midpoint, the modifier bounds are defined below.

The breakpoints by tonnage and rating are defined below:

Turrets suffer a -4 penalty, while tanks suffer a -2 to reflect their relative slowness in the background material. This may be removed in the future if chassis specific quirks are added to replicate this effect.